This is the first in a series of posts that will look at how the brand as publisher concept and the shareable formats of social marketing will impact and evolve politics in the upcoming election season.  More political campaigns will embrace the tools of social media, bringing those tools deeper into the awareness and understanding of the general population.  And, in turn farther into the marketers toolkit.

One of the tools in the brand publishing toolbox is the infographic. Using pictures to tell a story has been around for a long time.  USAToday made the infographic popular in journalism.  And, today, more brands are using pictures to tell their story and to feed the insatiable social appetite for more content.  While slower to the social game, but catching up quickly, politicians and political campaigns are starting to see the value of the connected conversations of the social Web.  And, many are starting to take a deliberate look at their publishing models.

In the pending context of an election year, the tools of the social publisher, from blogs to Facebook and video to infographics, the strategy of telling your story through multiple channels and in multiple formats will expand.  It’s in this context of need and ability that the infographic will take off as a standard communications vehicle.  The ability to easily tell a story in pictures in a way that conveys data is a natural tool for political campaigns.  There are few places where confusing data meets confounded meaning than in the context of a political campaign.  Conversely, there are few context where clearly conveying a message though a single image can help convert those 63% of people who consider themselves visual learners into activated, educated, engaged and committed voters.

Below is just one of the early examples where an infographic, or data visualization, can be used to convey a political point and message. (No political affiliation implied.) While I can argue that this isn’t a true infographic, I think it’s one of the many formats data can take to help convey the point of it’s message.

There’s no doubt that social media is one of the more confounding things for marketers in recent memory.  Even the Internet itself wasn’t as disruptive for marketers as the open, connected consumer-controlled conversations of the social Web.  It’s a challenge that most companies will consider and reconsider for the foreseeable future.

One area that is challenging a company’s effectiveness in social media is answering the question, “who owns social media?”  It’s understandable that ownership is causing so much trouble.  On the surface, social media just is another channel.  Traditionally, channels of information flow in one direction – from the brand to people.  How, when and why a message gets out has an established set of rules. And, creating a message and paying for its dissemination is applied to someone’s budget.  If you own the budget, you own the decision about what happens with that budget, the message, the channel and so on along long-established corporate assumptions and expectations.

The truth is, when determining who “owns” social media, you have to ask who “owns” the customer, or the public, or the stakeholder – because social media isn’t a mass medium.  It involves interacting with individuals in aggregate. And, chances are, this type of interaction involves more than just marketing, PR, advertising, IT or yes, even legal.

Unlike traditional channels, these channels are intended to be two-way mediums.  Programs that aren’t set up to expect, encourage, entice and promote that two-way interaction treat social media like any other traditional channel.  Unlike television, a print ad or even a press release, the content in these channels are intended to be consumed, shared, deconstructed, mashed up and responded to.

The dynamic nature of the medium calls for all hands on deck to be able to cultivate and manage the one-to-one, two-way conversation that happens directly with individuals in full view of everyone. The people who just saw the billboard you bought can now talk back – not through the billboard, but through social media, and you’ve missed an opportunity if you’re not able to respond. Your new customer who just spent two hours on the phone with your call center but still can’t install their software is Tweeting at you, and your lack of a response is apparent to all of the others watching the social discourse.  Or, you’re experiencing an outage across the western portion of your service area and your customers are lining up on Facebook demanding updates. 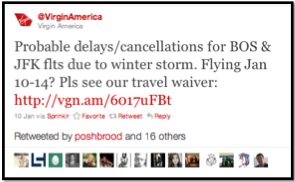 These are all real issues.  And, each of them requires coordination across different parts of the business.  The same parts of the business that may have had trouble working together in the timeframes of traditional mediums driven by newspaper deadlines and insertion dates.  Now, with the real real-time pressures of social channels, it’s more important than ever for everyone to understand their role and know that their job now includes helping the company address and meet the expectations of a connected world with connected customers and connected issues.

There is a path to integration.  It’s not straight, it’s not easy, and it’s different for every brand.  But, it will become increasingly important to brands who want to engage in these channels beyond what they’ve been able to so far.  If you’re still running your social media presence in silos, it’s likely getting harder to:

3) Manage the entire conversation about the brand – the good, the bad and the unimaginable

I’m going to tackle each of these points in another series of posts that will highlight what an increasing number of companies will experience this year, if they haven’t already – that social media isn’t the realm of one particular group or business area, but takes the entire organization to carry on a fruitful and sustainable conversation.